His Word, God has done a new thing in Okinawa, Japan during this History Maker Conference in 2007. No longer will Japan be known as the missionary’s graveyard, nor will it be said that Japan is a hard ground where the move of the Holy Spirit is difficult. Now, it can be said that revival is coming to Japan, or rather; revival has come to Japan in the tiny island of Okinawa! This is what the Japanese have been praying for a long time, and the time has come for them.

After flying over the entire night, the History Maker team was raring to go and rock the place for Jesus. We were full of expectancy and energy at the beach where the rally was going to be held. As the time dr 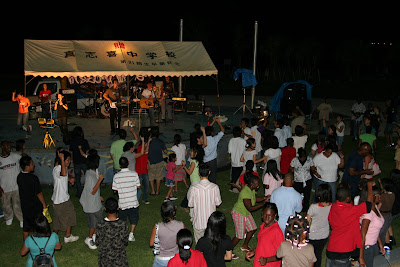 ew near, we were once again reminded 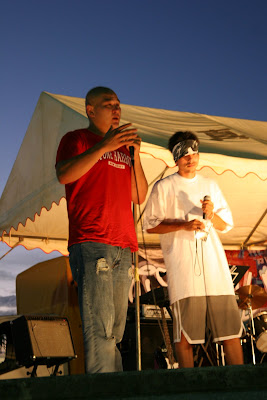 to be faithful with whatever little God places into our hands. Before our very eyes consisted only a handful of people, and the same question reverberated in everyone’s minds - is that all we have? Undeterred by the lack of numbers, the worship team gave it all we had and praised God as if there were hundreds of people around. It was a sight to behold as God revealed His faithfulness and the crowd started to throng in as the sun set against the beautiful seaside. As always, any sort of preconceived ideas about how a Christian rally should be done was broken as there wasn’t any sort of “formal” preaching. Instead, the Gospel was presented through music, drama and testimonies from various local youths. All Pastor Richard had to do was to sum up the entire night session by giving the opportunity for anyone who needed a miracle or a touch from God and the response revealed how hungry they were for a touch from heaven! In fact, despite the rally having gone on for almost 4 hours, it seemed as if no one wanted to leave! There is something happening in the atmosphere…

Like the previous year, the early morning prayer meeting in Okinawa is unique. It consisted not just of the team from Singapore, but many of the local del

egates as well. It was during this prayer meeting where we started to see God do a new thing in Japan - there is a new proclamation for this nation. There is no mistake because God always gives us direction in the prayer meetings, 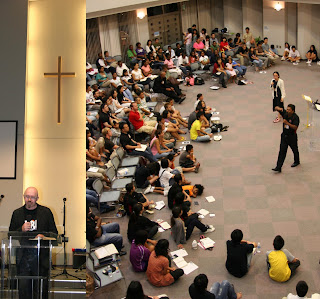 and this time is no exception. The prayer meeting closed powerfully when the youths from Fire Typhoon Organization were prayed for by everyone present, empowering them for what is about to take place in Japan. Pastor Steve and Pastor Richard later preached up a storm during the final session in the evening, but what really stood out was when Pastor Nakama from Fire Typhoon Organisation be the first to respond to the call given at the end of the meeting. The call was a hard one - being ready to give u

p your life for the cause of Christ. Tears rolled freely as people counted the cost of following Jesus and being a history maker for Him. It is no wonder why revival has come to Japan when you see the number of people kneeling at the altar. No longer living for themselves, these history makers are ready to lay down their lives to see revival hit Japan like a flood!

As the trip to Okinawa drew to a close, God did something very symbolic during the youth night gathering we had with the youths. Although there were no pastors nor preachers that fateful evening, the Holy Spirit ministered to the youths in such an intimate way, we know for a fact that something has changed on the inside of them.

They have seen first hand how God can use young people with no special qualifications to impact and touch the lives of their peers. Armed with the same vision and passion, a group of them will leave for Osaka the next week, ready to stir up a storm and see God impact that place. We ended off praising and jumping so passionately that some of us almost hit the roof literally! When the presence of God is so tangible, it results in such freedom and liberty that nothing else matters except praising God with every ouch of strength in our bodies.

Many of us felt an earthquake during the Sunday worship service and the tremors caused eyes to be alert, ready to take action should it get any worse. While we are prepared for a natural shaking, are we ready for a spiritual earthquake, a spiritual shaking that is to come in every nation as time draws near? Will we be aware and alert to what God is doing in these last days? The Holy Spirit is sweeping throughout Asia and the rest of the world, stirring up the hearts of man to rise up to answer God's call. What has taken place in Okinawa these 3 days is but a fraction of the revival that is to sweep across all nations. D.L. Moody put it so aptly "The world has yet to see what God can do with and for and through and in and by the man who is fully and wholly consecrated to Him. I will try my utmost to be that man." Can we, as history makers, proclaim likewise?