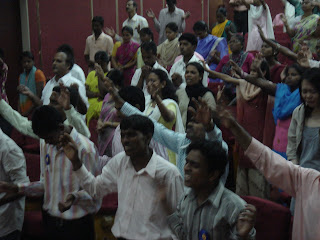 leaders from various places coming together and worshipping. They received God’s Word from Pastor Richard and Apostle Woodrow and prayer from the team. There was a deep desire to reach out and touch God. The presence of God came, ministering to many individuals that morning. There was an uplifting of downcast souls, a strengthening of hearts, and the Heavenly Father’s healing for those who were hurting. Such a time of ministry came at a right moment for these precious shepherds of flock and the clouds of gloom started to break up. It was a time to turn the onslaught of the enemy around! 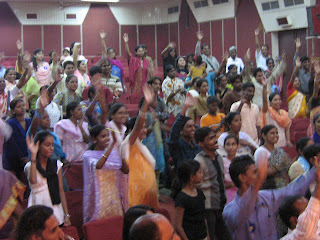 It was God’s desire to move in the lives of His people and His presence continued to sweep into the evening session. Down at the Mayor’s Hall, the History Maker band screamed with electric acclamation. The young and the young at heart jumped to the beat of praise and they all cried out, “Rain down on me, rain down on me… Sweet anointing, wash me over.” Pastor Michel of Sri Lanka shared a bold testimony about how God changed his life. And the c 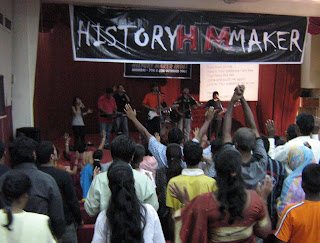 all was given that night, to come forth and be transformed by God: “If anyone is in Christ, he is a new creation. The old has passed away; behold, the new has come!” (2 Corinthians 5:17)

The momentum did not wane the next day. The History Maker team was at the backstage before the meeting started, praying for God’s breakthrough in India. That morning, Apostle Woodrow shared about how he was called back to Sri Lank 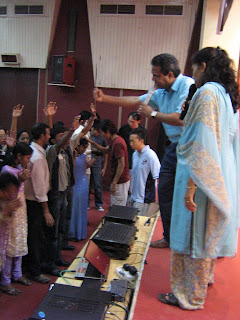 a from a comfortable life in the United States. His church planting movement faced intense persecution for years. But with each radical step of faith he took, he overran the enemy. Addressing the congregation, we have to lay down our personal burdens at the feet of Jesus before taking up His commission and run! One by one, the people stepped forward and laid their burdens down before God. As they cried out to Him, His fire fell upon many, and spiritual deliverance took place for those who needed the cleansing. That morning session stretched all the way into the afternoon and it seemed like nobody wanted it to end. The people proclaimed aloud the Word of God prophetically over the city of Mumbai and all of India. Something broke through in the spiritual atmosphere that day. We all looked forward in anticipation for the final night of the conference.

The congregation doubled its size by evening. The band from Mumbai led praise to Jesus in rhythm and dance. The band from Singapore rocked exaltation to our God; nothing could compare with the sweet presence of God that was there. Pastor Richard preached on Gideon’s army of 32,000 against an enemy of at leas

t 135,000 by conservative estimates. But the Lord said to Gideon, “The people with you are too many…” (Judges 7:2) With God’s unique brand of mathematics, He brought the size of Gideon’s army down to 300 – God could only use soldiers who were 100 percent committed! Pastor Richard took the message home that night – a 90 percent commitment to God was as good as a man having 6 days for his wife, and 1 day for an extramarital lover! Many were convicted that night, ready to lay down their all for Jesus. Yes, that was just what India needed – a man who would be willing to lay down his life 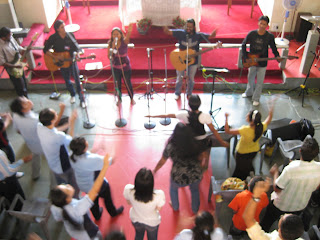 for the sake of the gospel so that the nation can be saved!

The History Maker conference in India did not end there. We headed for Navi Mumbai the next morning. When we arrived at Jubilee Church, it was almost like Sunday. The ushers were at the door welcoming people and the place was packed! From Mumbai to Navi Mumbai, we saw that the Christians were ready to lay aside their burdens and worship God with their whole being. In spite of the persecution that was going on and no matter how they were feeling that day, they were just ready to surrender to their Heavenly Father. And at the end of that day, the History Maker call was given – are you ready to die for Jesus?

It was not a mistake that the History Maker conference was brought to Mumbai and Navi Mumbai. As the people of God step forth in faith to reach their city for Jesus, a place like Mumbai would no longer merely be known as the financial capital of India, but a forerunner in India as a centre of revival! As the History Maker team left Navi Mumbai and headed for the airport, we saw the pagan processions thronging the streets. But we knew in our hearts, that if the church of India were to stand firm in Jesus, the procession of Life would one day confront the parade of death on the streets, and stay “Stop!” For the Light shines in the darkness, and the darkness cannot overcome it! (John 1:5)
Newer Posts Older Posts Home
Subscribe to: Posts (Atom)