“History Maker should focus on the major cities in ”, was the suggestion that came from a History Maker partner, Pastor Hanny Yasaputra when Pastor Richard was ministering in . It has alway

s been a HM philosophy; if it is God’s will He will open the door. Then suddenly one morning a call came from Pastor Hanny and the rest was history! God indeed has been orchestrating the entire arrangement, it was a set up! The door is open for us to go to , a name more famous than itself! 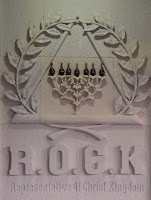 nted 120 churches all over ; with endless incredible miracles in building the R.O.C.K. church and being one of the biggest movements in has kindly invited a nameless, faceless bunch of people to bring revival to his young people. What humility! What a spirit he carries! There is always a deeper, greater, higher and further work the Holy Spirit can do. We sensed that this conference may probably be the most phenomenal this year. But is the team ready for such a platform?

This year we realized that every nation which we have been thus far is an entirely new city for history maker; Penang, Hong Kong, China, Bali, U.S.A., and not forgetting Thailand, Mumbai, Osaka and South Africa; they are all are new cities! God indeed is doing a 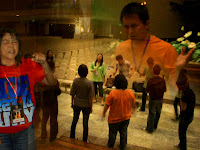 new thing in our midst and opening new doors for us.

's wide variety of attractions, the physical beauty of the island, and the year-round pleasant climate make a place regarded by many visitors as the ""; the most enchanting travel and holiday destination in the whole world. We know that we are not going there as a natural tourist but as a spiritual ‘arsonist’, to set the young people on fire! 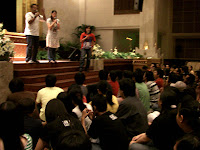 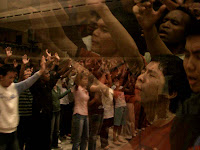 started the first night session with an altar call for people to be filled with the power of the Holy Spirit! She totally shocked all of us and did something that is so out of the box! Guess what? Many young people responded without hesitation! Talk about anointing! What is even more incredible is she went to knowing that she has no interpreter! Tsukae Matsuda with her limited English, tried to interpret and Pastor Yosi who will in turn translate it into Bahasa. What a sight to behold. There was so much synergy and anointing flowing among the three of them, it was simply unbelievable!

“Do you have an upper room?” “Will you inconvenient yourself to get a hold of God?” “Have we stopped hungering for more of God?” set the ton

e for the second night meeting. Pastor Richard preached up a storm like never seen before; stirring the crowd with his incredible testimonies and tearing down every form of tradition issuing a challenge to have a fresh encounter with God. The Word of the Lord came so clearly that night; the longer we walked with God, the more we should keep our relationship fresh.

The next morning we

have three workshops running concurrently. Pastor Robert Lie from and Eugene Leong led the Youth Leadership workshop, while Pastor Cin Kim Pau from and Josiah Khoo tag the workshop on Evangelism. The workshop on Discipleship was done by Pastor Kelly Koh from and Derek Tan. We are discovering more than ever there is a great need among the body of Christ to be actively involved in one on one evangelism and discipleship.

On Saturday, the finale night, it was the most awesome meeting. God has been building up their fai 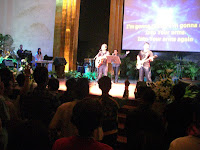 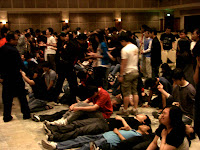 hrough viewing all the three night videos of pass History Maker Conferences. They have caught something in the spirit realm; a vision bigger than themselves. A call to die for Christ – the central message of every conference, brought more than 90% of the crowd to the altar, crying, wailing and broken before the presence of God. The atmosphere was electrifying and the anointing was so thick that you can literally cut through it! Many were drunk in the spirit; Pastor Richard could hardly stand upright to pray for them. Pe 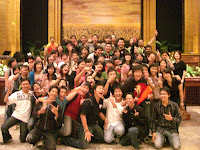 ople were piling on top of each other when the power of God hit them! It was by far the best respond and result from any history maker conferences.

Is God doing a work in ? Believe it, He is! In a nation primarily dominated by Muslims and Hindus, He is raising up a formidable, radical end time army who is willing to dispossess everything and be completely at His disposure; ready to die for Him.

As a result of the Holy Spirit breakthrough we believe the cities in is going to be impacted in a powerful way. To God be the glory!