A NEW START, A NEW BEGINNING- It is one of the shortest yet most powerful conferences to date. This trip to was an eye-opener to many of God’s mighty power and sovereign hand. This is a new start and a new beginning for .

The trip to was in many ways a pioneering work. It marks History Maker International’s first trip to in the archipelago of . Also, this trip had one of the biggest, if not

the biggest delegation from , a first for many of our young members. With a strength of 31 from , aged 15 onwards, and others from and , we went forth for this trip with great expectations. Coupled with our excitement were feeling 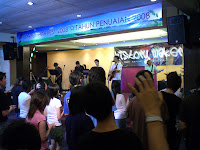 s of nervousness and uncertainty on what might result from such a short trip. If all was going to be is just another “good” mission trip, then all the prayer and preparations would have gone to waste. 2008 is a new year and we expect not just another “good” mission trip, but one that changes the very fabric of history – hence History Maker Conference. How ironic it would be to expect anything less than changing history after holding a conference with such a name.

In any case, we kicked off the conference with a night session expecting a huge crowd based on the size of the hall. Unfor

tunately there were only a handful of people, but when we ended the session, everyone present felt challenged and excited, wanting to claim dominion that God has given us after the preaching by Rev. Philip and Pasto

r Richard. However, there was a tingling sense that we’ve only scratched the surface of what God had in store for us. As a result, we prayed and interceded for God’s river of revival to overflow its banks. Many of us prayed through till about 2 a.m. despite having prayer the next morning at 530 a.m. We were desperate to see the full measure of the Holy Spirit’s power move and take control without any inhibition!

Having pumped in ample prayer, everyone was geared up for the morning session on discipleship. Whether or not it was because today was the actual day of election where everyone had to vote, once again we experienced a small turnout. However we did not allow ourselves to be disheartened by the numbers. Instead we gave our all and a variety of speakers took stage to share and illustrate the model of discipleship, something that is crucial to the existence of History Maker.

All this time, Pastor Robert and his team from was ministering alongside with us in the Bahasa services where language wasn’t a barrier for them. There was such

a passion in them that Didi, an Indonesian youth extended his testimony sharing from 10 minutes to 25 minutes! He would have continued if he was given the opportunity to. Such was the level of fervency in the Bahasa services.

Somehow in our spirit, we knew that God was planning something really powerful for our final night session on Saturday. Pastor Michel from rallied and challenged the large crowd with testimonies from his country, paving the way for Pastor Richard who preached up a storm like never seen before. There was such an overflow of God’s anointing in the hall as throngs of young people answered the call that night to lay down their lives for the cause of Chr 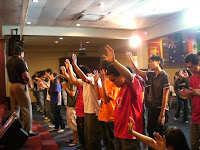 ist. There was such a mighty move of the spirit that few were left standing and having tear-streaked faces were found all over the hall. There was such an intensity in the atmosphere that only the power of God could have provided.

Just as we thought this was the end of the night before majority of us return to , we were all taken aback by the events that followed soon after. Pastor Sam from announce

d that he received news of the elections that ended at earlier in the day. Their prayers for change for the country have finally been answered. There has been a major upset in the political arena of in this general election. , traditionally considered a stronghold of the current government, lost to the opposition. Such a major political upset has not happened for years in ’s history. As Pastor Richard shared, “Political leaders can be replaced by God, but spiritual leaders are only released by Him!” is about to see a change in their country’s leadership, but more importantly, the spiritual leadership is about to rise and take their rightful place.

History Maker International conference – it is a time for change, a time for making history indeed. Reflecting back, this trip brought to mind two other trips we had gone on before. The first was our maiden trip to . Similarly, we started out with a tiny crowd for the first two meetings, but ended off with a life-changing experience for num 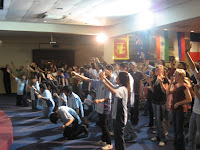 erous lives. Till today, has never been the same ever since the vision of History Maker was carried over. The fire and passion is still going on strong and reverberating throughout the nation of because of the obedience of an insignificant group to go forth and spread the radical call of giving our lives to Jesus

Christ. The second trip which was brought to remembrance was the first trip to . During our visit there, there was a shifting in the political arena and the history of would be changed forever. began to experience a new start as the last Hindu monarchy in the world collapsed.

This is what History Maker conference is all about, making change and creating history wherever we go. It does not matter which country goes, be it or , or , t

he Holy Spirit remains the same! God wants to bring change for nations all over and beyond, but He is looking for someone to answer His call. His call may not be easy, but one thing we have found out after going for so many trips – He enables those who obey, regardless of age or experience, to bring change to those who hunger and thirst for Him.

What a way to start the year with such a trip! has set the standard for 2008, so watch out , because God is about to alter history wherever His Spirit goes!