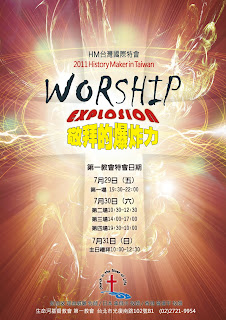 The theme for HM Taiwan 2011 was WORSHIP EXPLOSION. This was the first time we had the biggest team ever; 28 people from Hong Kong led by Ps Amos Tsang and Ps Teresa, Dr Richard William and Ps Kelly from Singapore, Apostle Nakama Naomi and Eddy Thayer from Japan formed the team to Taiwan. 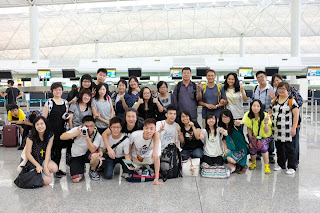 The HM Taiwan started with a “bang” on Friday night! It was far from a normal prayer meeting! The hall was filled with unbelievable joy and faith. In accordance to the measure of faith the people had, God moved! We had an awesome time of body ministry and stood in the gap for the nations of Japan and Taiwan calling for a much needed revival; desperate for a divine intervention for such a time as this. Many people were so thrilled with what God is about to do in this hour of history, the atmosphere was charged with great faith and expectancy. It felt almost like it was the finale night!

Apostle Nakama Naomi, HM Director for Japan started the next morning’s meeting with a radical and “dangerous” notion. 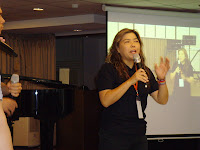 Traditional, religious church verses the unconventional and “structure free” church. The latter is not plan, initiated and orchestrated by men but totally directed by the Holy Spirit!
Japan has gone through “hell”. She has been bombarded with countless devastation: earthquakes, the strongest in Japan's recorded history, tsunami and radiation leak. Although there is a shaking in the natural, a parallel shaking is taking place in the spiritual realm. The aftermath has left the Japanese with no hope or faith in the government and is so ready and open to the gospel, the good news! The face of evangelism has changed. Traditional evangelism is primarily an invitation to come into church through programs. However now we bring the church to them! This is the hallmark of a true history maker; we don’t wait for a revival, we start a revival! Hallelujah!

She shared about an ex-heavy metal artist who lived in a card box, sold his soul to Jesus, and how he got saved. Now he is a radical evangelist used by God to reach out to the “dangerous” gangs in the streets of Japan. Once he pulled out the driver off the car and locked the car so he could preached to the tattooed gang members for 30 minutes! The once “peaceful” and “safe” environment became “dangerous” as more gang members are found in the church. Frictions, fears and tensions rise as many of her church members feel threatened and uncomfortable. She said it interesting to see how they squirm in their religious bubble. Again she reminded us that the church should never forget her missions and mandate. It was amazing to hear testimonies after testimonies of what God is doing in Japan! Indeed Japan shall be saved! 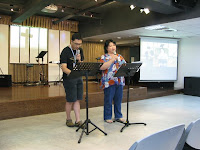 In the afternoon session Ps Kelly spoke on The Abiding Presence of God. We need to move from a position of visitation from God to manifestation of God and ultimately a habitation for God. Worship was never about us to begin with. We are here to please Him! 2 things will bring the presence of God; one is through prayer and the other is through praise and worship. The spirit world is
just as real as the material world. Angelic visitation, falling of gold dust and precious stones should be regular manifestations in our services! The need to have the Spirit of God moving in our worship has never been greater! 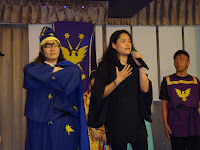 Next, the Hong Kong team presented a 20 minute drama on “The Kingdom”, an awesome classic evangelistic drama depicting the love of our heavenly Father. Ps Amos shared on how worship can bring down the presence of God. When Solomon dedicated the temple, the Glory of God fell; when Elijah called upon God at Mount Carmel, the fire of God fell and lastly when King Nebuchadnezzar worshipped God by putting his singers at the front of the battle, God came and wiped out his enemies! There is power in praise and worship.

There was a tremendous hunger for the authentic move of the Spirit. Jim Cymbala, pastor of The Brooklyn Tabernacle once said, “I despaired at the thought that my life might slip by without seeing God show himself mightily on our behalf, always preaching about the power of the Word and the Spirit, but never get to see it”. This is the time for heavenly invasion of fresh wind and fresh fire into our dead and boring worship experience! Something must change!

Exuberant worship set the tone of the night meeting. There was such a release of heavenly joy in the atmosphere. It was unbelievable! Many were laughing and dancing in God’s presence! They were so “high”. We couldn’t stop singing the same one word chorus for over 20 minutes! Next we had Rapper E, Eddy to do a rap entitled “Show and Tell” which totally rocks the house. Church must be the most “happening” place for all young people! 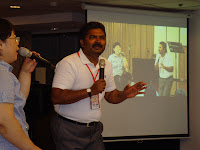 22. We need to break out from the traditional 5 songs, 1 announcement, 1 preaching, collect offering, benediction and then refreshment! Today’s service can become so predictable that we leave no room for the Spirit to have liberty to do anything. God wants to renew His people; to call us back from spiritual dead ends, apathy and lukewarm religion. We have to move away from
the cheap substitutes that are so popular today. True worship will cost us something, perhaps to sacrifice beyond our imagination just like Abraham ready to give up his son. It goes beyond feelings and true worship requires the flesh todie. Inevitably true worship will bring manifestations and revelation.

As the power of God hit the place, cries of repentance filled the room. Many were screaming as conviction fell and many were shaking and quaking in the presence of God! Scores of people were set free and filled with His power! It was phenomenal! To God be the glory!

Another unique event was the ever first ordination service to be conducted during the HM Conference. 2 elders were ordained in the first service while 4 preachers and 4 pastors were ordained into the ministry in the second service. It is a milestone for the Church in the River of God. Indeed God is raising up more workers to reap the end time harvest! Leadership development is a life time journey not a brief trip. It is men who appoint but God who ordains.

For the morning service, Ps Amos shared a simple yet a great reminder to all of us on what God has impressed upon his heart for the congregation. He exalted us with four things: to be fruitful, to be faithful, to be peaceful and lastly to be joyful in our lives.

“What makes areal leader?” Dr Richard reiterated the call of History Maker and that is we are called to be the shadow! We only have one mandate and that is to make Him known! The main text is taken from Matthew 12:16-21. “From today, you cannot resign anymore!” a stern and uncompromised message to all those candidates who were ordained. Someone said, “Nearly all men can stand adversity, but if you want to test a man’s character, give him power”. Leadership has never been about title or the gift or the role but its function. The greatest prove of our calling is the deposit of the Holy Spirit. Our assignment is to hang out with our Master; ministry is but an overflow of our love for God. To keep our perspectives in place, Dr Richard ended with a powerful story reminding us not to look for rewards here on earth as we are not “home” yet. Indeed He must increase and we decrease!

In the second service Dr Richard further pounded the responsibilities of a spiritual leader from Ephesians 4:7-12. We are given heavenly spiritual leadership gifts to continue what Jesus has been doing; to kick the “butt” of the enemy! We are sent to build God’s kingdom. Leaders are men and women who are resilient and refuse to take a posture of defense. Expect great things and attempt great things for God! The kingdom of God is a forward moving kingdom who knows no retreat! We must be driven by a passion and purity that brings force and clarity to the grand old gospel, bringing it alive with contemporary vitality and relevance. A new day has dawn! This is the hour for the church to arise!

One of the highlights in the ordination was the various candidates taking time to express their heartfelt thanks and gratitude to God. Many of them will continue what they are already doing in the ministry but with greater sense of purpose and anointing. They were provoked and were greatly challenged to bring the gospel to the ends of the earth! Beyond all these, a new sense of commission from God and an endowment of power from on high defined the significance of the ordination.

It is without question that in every History Maker Conference, we earnestly yearn for His boundless presence to be manifested in every meeting. After each conference we are catapult to a greater dimension of work of the Holy Spirit. We are more driven than ever, more determined than ever, more desperate than ever to usher in the greatest reformation in the history of Christendom. We believe it will be our finest hour!
Newer Post Older Post Home